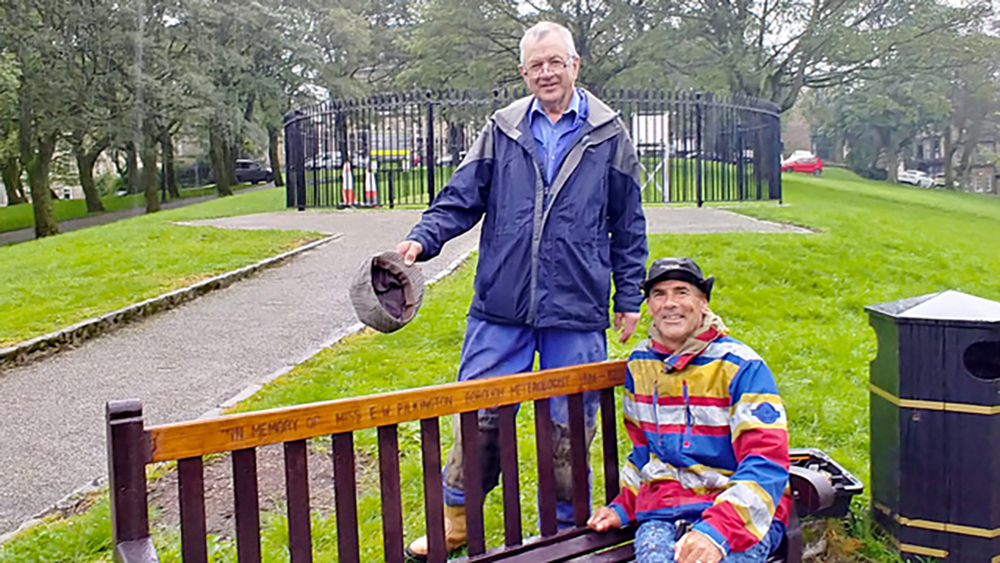 The Friends of Buxton Station (FoBS) have been honoured with The Queen’s Award for Voluntary Service, the highest award volunteers can receive in the UK, and viewed by some as the MBE for volunteers. Best known locally for their work to make the town’s railway station more welcoming and comfortable, they have also been active in the wider community, particularly during the year of lockdown when they hosted a large part of the alternative wells dressing festival and put together a Rail Retail Trail leaflet to help local independent businesses recover from the effects of Covid-19 shutdown.

FoBS is one of 241 charities, social enterprises and voluntary groups to receive the prestigious award this year. The number of nominations remains high year on year, showing that the voluntary sector is thriving and full of innovative ideas to make life better for those around them.

The Queen’s Award for Voluntary Service recognises outstanding work by volunteer groups to benefit their local communities. It was created in 2002 to celebrate The Queen’s Golden Jubilee. Recipients are announced each year on 2nd June, the anniversary of The Queen’s Coronation.

Award winners this year are wonderfully diverse. They include volunteer groups from across the UK, including an inclusive tennis club in Lincolnshire; a children’s bereavement charity in London; a support group for those living with dementia and their carers in North Yorkshire; a volunteer minibus service in Cumbria; a group supporting young people in Belfast; a community radio station in Inverness, a mountain rescue team in Powys and, of course, our local station adoption group.

Group representatives will receive the QAVS award crystal and certificate from Mrs. Elizabeth Fothergill, CBE, the first female Lord-Lieutenant of Derbyshire, later this summer. Furthermore two volunteers will attend a garden party at Buckingham Palace in May 2022, along with other recipients of this year’s Award.

Over this last year, FoBS have concentrated on their community based project work, involving local organisations not often associated with rail travel. Through more innovative art schemes including the steam train image on Palace Road and the huge Stationary Reflections piece at the end of Platform 2, they partnered with Buxton’s Moore Care and community artist, Matt Cooper.  Featuring artists with learning or behavioural issues, the installed artworks have generated tremendous support and positive comment.

Local wildlife has also benefitted from the Friends’ help, undertaking rewilding work by the station, stacking up cut and fallen branches to rot down, providing food and housing to insects, and installing bird nesting and bat roosting boxes.

Dave Carlisle, FoBS chair said: “We’re absolutely delighted that our community work has been acknowledged at such a high level.  This Award pays a fitting and glorious tribute to the hard work and commitment of all our volunteers and those who work with us.  It’s a right Royal pat on the back!”

Some of those who have worked with the volunteers were quick to add their congratulations. Louise Potter, Derbyshire’s first High Sheriff to come from Buxton paid tribute to the volunteers, saying: “As the Queen’s local representative, it gives me great pleasure to see her special Award go to such dedicated volunteers – they do so much, not only for the station and its surroundings, but also for the town as a whole.  I have followed their progress and appreciate the efforts they make on behalf of Buxton people.”

Community Rail Network chief executive Jools Townsend said:“We’re thrilled the Friends of Buxton Station are deserving recipients of the Queen’s Award. This underlines the important role of the community rail movement and station volunteers, helping communities to derive maximum benefit from their local railways and stations. The Friends of Buxton Station are an inspiration for the 1,000+ station friends groups across the UK, with wide-ranging work bringing the community together, promoting sustainable travel and tourism, and improving the local environment for people and nature.”

Dr Steve Bradshaw, director of Buxton Town Team offered his congratulations to the group too: “They are infectiously enthusiastic and have a lovely, welcoming, inclusive attitude, which extends friendship to all.  Their projects are quirky, environmentally sensitive and locally relevant. It’s fantastic that their hard work has been recognised in this way.”

High Peak MP, Robert Largan added: “Many congratulations!  I’ve met the Friends several times and always been impressed by their commitment to see things through.  We are currently working together with the owners of the land next to the station and the Council to persuade them to do something positive with it for the town.”

Chris Jackson, regional director at Northern Trains Limited said: “So well deserved.  We have worked with the Buxton Friends many times and found their innovative approach refreshing.  It’s a joy to see what they’re planning to get up to next!”

Keeping You on Board – Issue 24