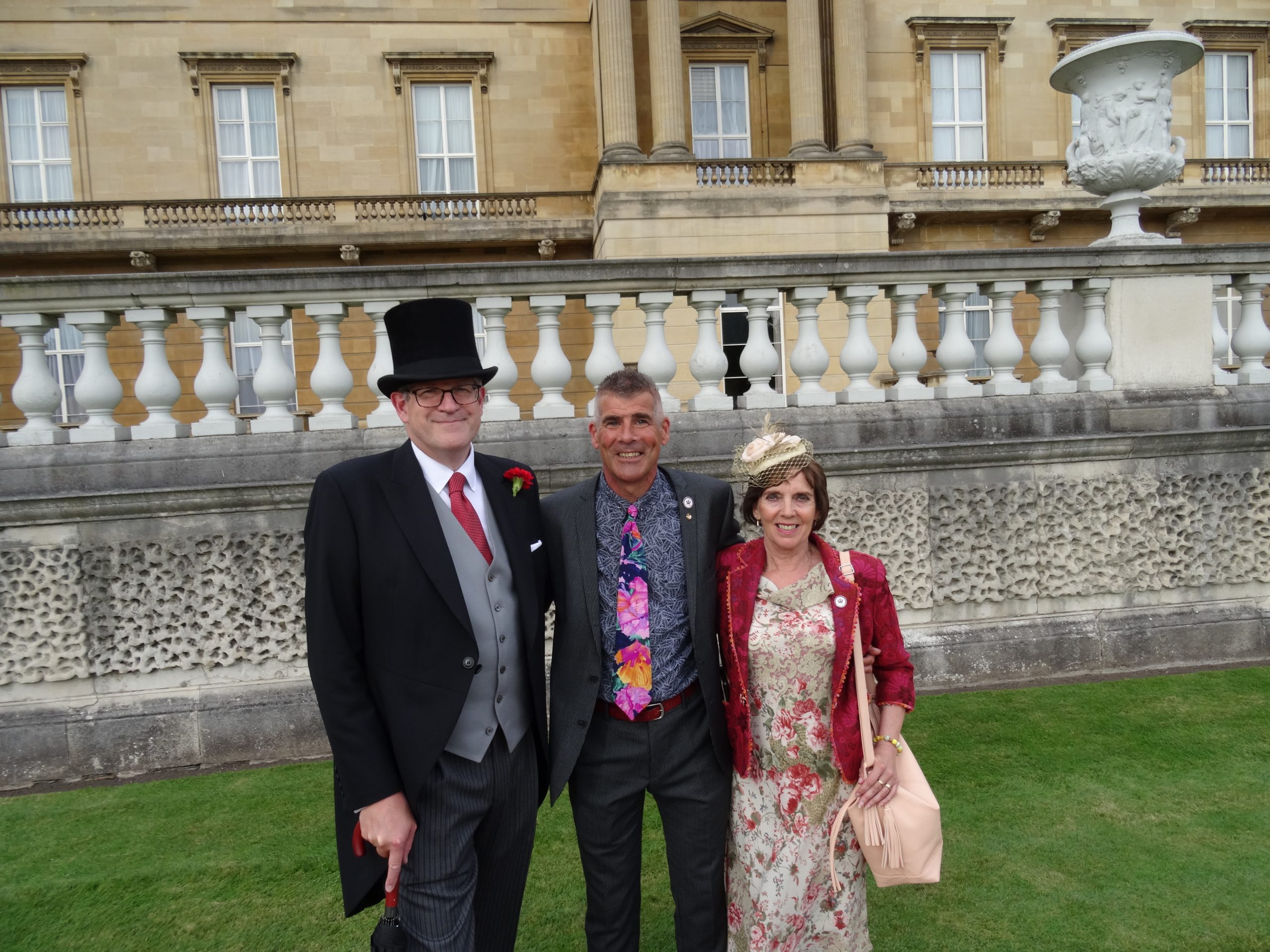 Members of local voluntary group, the Friends of Buxton Station (FoBS) enjoyed a very special surprise when they attended the second Royal Garden Party at Buckingham Palace on 18 May.  The group were invited to be there after receiving The Queen’s Award for Voluntary Service last June.

FoBS Secretary, Sue Mellor and Chairman, Dave Carlisle were given the privilege of a “royal appointment” with The Queen’s youngest Son, HRH Prince Edward, the Earl of Wessex.

Sue explained how this came about: “We got a bit lost and found ourselves entering The Palace at the main gate, just off The Mall: we had intended to go in through the quieter back gate off Hyde Park Corner.  We had gone quite early, thinking it would be busy on such a sun-drenched afternoon.  The result was that we were amongst the first on the Palace lawns and soon were greeted by a dapper chap in a top hat.”

Dave continued: “He chatted along with us for a few minutes and was impressed with our voluntary work, spotting our Queen’s Award button badges. He asked, ‘Would you like to meet the Earl of Wessex and tell him all about your Award?’”

Arrangements were made and the pair realised that they had been selected for a Royal interview, one of only a handful of partygoers picked to do so from the more than eight thousand present.

They were given a quick guide to Royal Etiquette – how to greet the Earl, by nodding politely and referring to him as ‘Your Royal Highness’ first, then subsequently, ‘Sir.’

Sue was asked to curtsey with a slight nod too. She had never done anything like that before and worried about toppling off her high-heels!  Both were asked not to reach out to shake hands, nor to take any photographs.

Her Majesty, The Queen was suffering from mobility issues and was represented by Prince Edward and other members of the Royal Family, including Sophie, the Countess of Wessex and Kate, the Duchess of Cambridge.

Sue and Dave were gathered with a few others on the raised terrace at the rear of the palace and were met by an army of Yeoman Guards, who trooped them along to form “The Earl’s Avenue,” a colourful Guard of Honour in the centre of the lawn.

The pair were placed at position C, meaning that they would be the third interview.

Sue added: “We were introduced to the Prince and he instantly put us both at ease with his warmth, reaching out to shake both our hands with a smile. Conversation flowed freely and he was genuinely interested in our conservation efforts to help our endangered Bilberry bumblebees.  He asked us to keep up the fight!”

Dave continued: “We were told not to expect more than a couple of minutes with the Earl, but we were merrily chatting away for about five.  He was also keen to learn about our other work to help local independent traders post-covid lockdown and promote Buxton.”

Dave added finally: “Sadly, I forgot to mention our Platinum Jubilee project, but we did ask for our best wishes to go to his Mum and our hope that she is well soon and able to fully enjoy the planned celebrations.”

Keeping You on Board – Issue 24