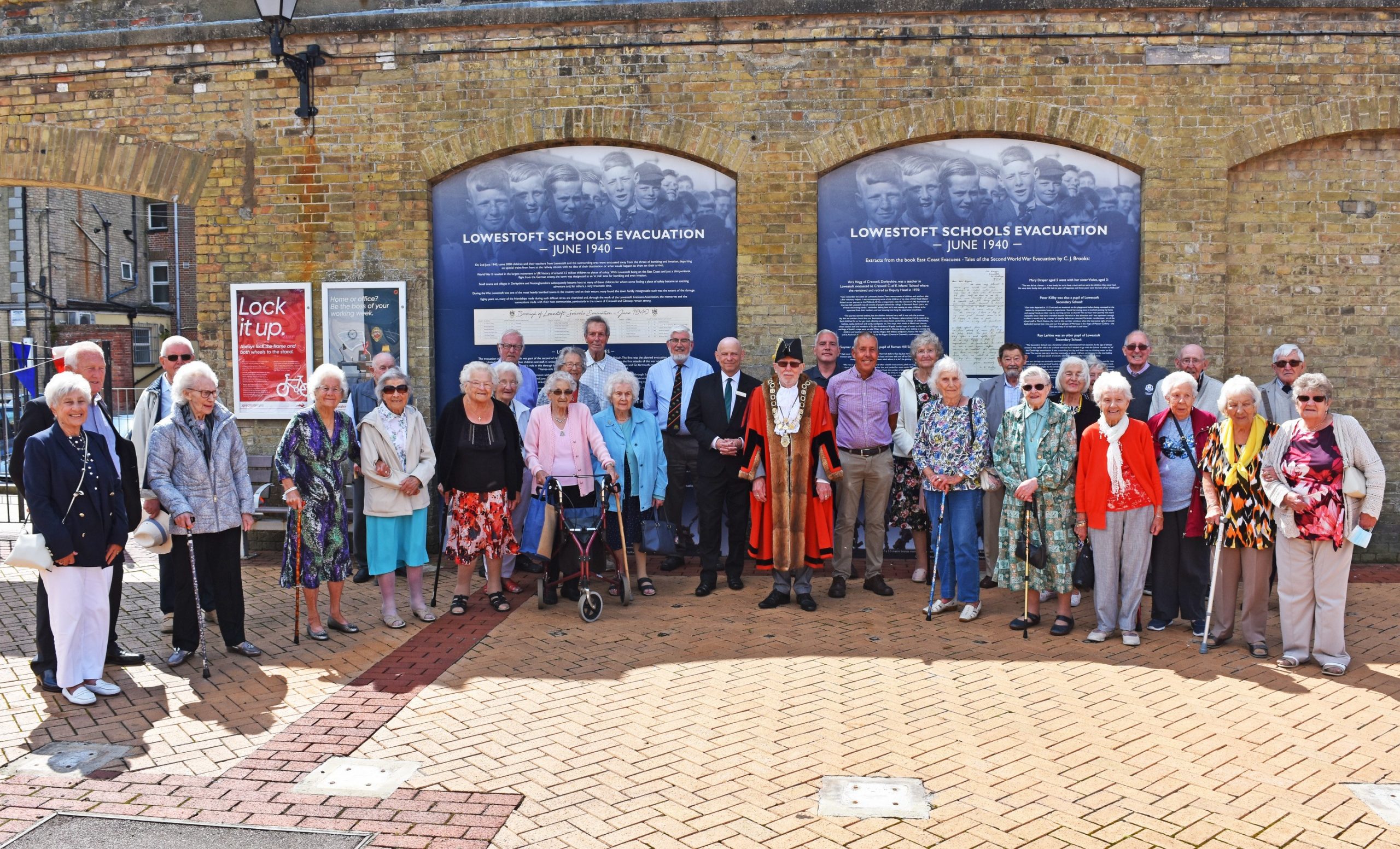 Two large panels featuring memories of the wartime evacuation of Lowestoft school children have been unveiled at a special reunion event at the town’s railway station.

The Lowestoft Central Project together with the Wherry Lines Community Rail Partnership worked with the Lowestoft Evacuees Association to create the boards which it is hoped will help preserve the story of the town’s evacuation day for future generations.

In June 1940 some 3000 children from Lowestoft and the surrounding area were evacuated on a series of special trains, departing the station for small towns and villages in Derbyshire and Nottinghamshire. At the time Lowestoft was under serious threat of both bombing and invasion and the Government ordered the evacuation of over 3.5 million children away from the coast.

Eighty years on and through the work of the Lowestoft Evacuees Association, the strong bonds which were formed between Lowestoft and the host communities remain strong and over the past 30 years numerous reunion events and visits have taken place.

Originally planned for installation to mark the eightieth anniversary in June 2020, the summer reunion event was delayed due to the Covid 19 pandemic and was unveiled at Lowestoft Station at the evacuees rescheduled gathering which took place on Saturday 31 July.

600 of those evacuated in 1940 found safety in and around the town of Glossop and over several years in association with the Friends of Glossop Station, annual reunion events have taken place with information celebrating this unique bond between the two communities installed at each station.

As well as featuring memories of the evacuation day, the panels which were designed by James Mingay contain a personal letter written in 1940 from a Mrs Boffey to the mother of evacuee Clive Capps, then aged 7. She cared for him at her farmhouse near Cresswell in Derbyshire and wrote to reassure his mother. The installations also contain details of the schools evacuated and an image from the Bert Collyer Collection depicting the bombed-out Lowestoft Central School providing a graphic reminder of the severe dangers posed were the children to have stayed at home. The foot of each panel contains an image of a sculpture created for the British Evacuees Association by artist Maurice Blik. Every Which Way is a 5.5 metre-long bronze memorial marking the wartime evacuation of children and was installed at the National Arboretum, Staffordshire in 2017.

Neil Williams, Chair of the Friends of Glossop Station said; “For the last eighty years there have been strong connections between Lowestoft and the Derbyshire town of Glossop linked to the arrival of 600 child evacuees on June 2 1940. Glossop found homes for all these children many of whom remained for the duration of the Second World War. After 1945 most returned to Lowestoft but some remained, friendships endured and strengthened over the years with some evacuees eventually marrying local people.

“In 2016 the Friends of Glossop Station installed a commemorative plaque to mark the many years of evacuee visits to Glossop, a special illustrated information panel about the evacuation was also created for display in the Waiting Room with an identical copy gifted for display in the Booking Hall at Lowestoft station. It is hoped that these, along with the evacuees’ own recollections, will help the story of this historic event and the connections subsequently made between our communities to live on.”

The special panels have been produced by Community Rail Development Officer, Martin Halliday, he said; “Lowestoft is indebted to the people of Derbyshire and Nottinghamshire who took care of our young citizens, enabling them to lead their future lives in the full freedom which the country fought so hard to maintain. “Hopefully these panels will help preserve the memories of this significant event and the important role the host communities played.”

Lowestoft Town Councillor, Andy Pearce said; “Lowestoft Town Council is delighted to support this significant initiative, the installation of these panels will help tell the story of our town’s wartime evacuation and will be vital material for future generations to learn and honour our heritage.”

Greater Anglia’s Community and Customer Engagement Manager, Alan Neville said; “Greater Anglia is pleased to have facilitated the installation of these panels. Hailing from Derbyshire myself, it has been fascinating to learn more of the links which exist between the two counties and to assist in the preservation of such important memories.”

Principle funding for the panels was provided by the Wherry Lines Community Rail Partnership, Lowestoft Town Council and the Lowestoft Central Project with additional support from the Northern Line Group of the East Suffolk Lines CRP and content from the Friends of Glossop Station, author and chair of the Lowestoft Evacuees Association Chris Brooks and Clive Capps, co-author of the recent publication ‘A Long Way From Home’, which includes stories from forty former Lowestoft Evacuees.

We’re excited that our Friends of Buxton Station have been short listed for FIVE awards in this year’s Community Rail Network Awards.

We will be at Sheffield station on Thursday 26th August supporting EMR and other partners.

Peak District Days Out By Rail