The start of the Pennine Way

The Edale Valley is a wide expanse of green which lies to the south of the great gritstone and peat mass of Kinder Scout. The village is at the southern end of the Pennines and the start of the first national trail, the Pennine Way, opened in 1965.  It starts in Edale and is a 268 miles (429km) walking route up to Kirk Yetholm in the Scottish Borders.

Edale or ‘Aidele’ is mentioned in the Domesday Book in 1086.

In Elizabethan times the valley was effectively a large cattle ranch based around five royal farms (the booths).

The Old Nags Head Inn in the centre of the village is named after the packhorses that waited outside for their masters during the long journey from Glossop to Sheffield. Edale used to have a cotton mill built in 1795.  Many women workers walked each day from Castleton over Hollins Cross –about 1,000 feet above sea level. Packhorses brought raw cotton over the moors to be spun into thread which was then taken back to Manchester. The mill continued to spin cotton until 1940.

The Victorian church was built in 1885 to replace an older chapel across the road. Edale farmers had to carry their dead over the hill to Castleton along the ‘coffin’ route before the graveyard in Edale was built.

Kinder Scout is the highest point in the Peak District and was the target of the Mass Trespass in 1932. In April 1932, 400 people set off towards Kinder Scout on a Mass Trespass. The protest was about the lack of access for walkers on the moors. Their actions helped to establish National Parks in the UK. The Peak District National Park was the first national park in the UK, designated in 1951.

Kinder Downfall is the tallest waterfall in the Peak District. Below is Mermaid’s Pool, said to be inhabited by a mermaid who will grant immortality to whoever sees her on Easter Eve.

The Midland Railway line opened to passengers in 1894 linking Sheffield with Manchester. The station to the south of Grindsbrook Booth was named Edale and is the one still in use today.

Follow in the footsteps of the Mass Trespassers.  There are plenty of high and low level walks in and around Edale.

Here are links to two walking guides for the Edale area:
Experience Edale – self guided trail >
Moors for the Future Edale route >

For more information visit the Peak District National Park’s Edale Visitor Centre, only a 5-minute walk from the railway station along the road up to the village centre.

There are two pubs, several cafes and a general store in Edale. The Ramblers Inn just up from the station hosts the band for the monthly Sheffield – Edale live music folk trains. Public toilets can be found next to the village hall in the large public car park over the road from the station.

The station is on the Manchester Piccadilly – Sheffield “Hope Valley Line” and the trains calling at the station are mostly operated by Northern Trains.There is one train an hour in each direction throughout the day but fewer trains later in the evening, so do check the timetable carefully before you travel. Northern’s trains stop at every station along the line apart from a couple of trains from Sheffield in the afternoon which omit some stops.
Click here for Northern trains info >

You are expected to have a valid ticket before you board the train so please note that the only ticket machine at Edale Station is the one on the Manchester-bound platform next to the station car park. If travelling towards Sheffield from the opposite platform, allow time to get your ticket from the Manchester platform first.

Access to both platforms at Edale is step-free and a subway under the tracks provides the link between them. Please note however that the platforms are a little low which means that it is a large step down from the train.

There is a waiting shelter on each platform for passengers and free wifi. Whilst waiting for your train why not have a look at the information and artwork provided around the station by Edale Station Friends, the local station adoption group, or enjoy a cup of tea in the friendly Pennypot Café found on the station driveway.

Edale does not have any regular bus services, so be prepared to walk or cycle if you wish to get to other villages in the Hope Valley. Castleton is 3 miles away but involves some steep climbs and descents over the hills to get there. Hope is 5 miles away (but it does have a railway station which makes life easier). Edale Station has securing hoops for bicycles in the station car park.

The station adoption volunteers at Edale are very enthusiastic supporters of the railway and their village. They are working hard to provide plenty of information and items of interest at the station for the many visitors attracted by the scenic beauty and delightful walks in the area. 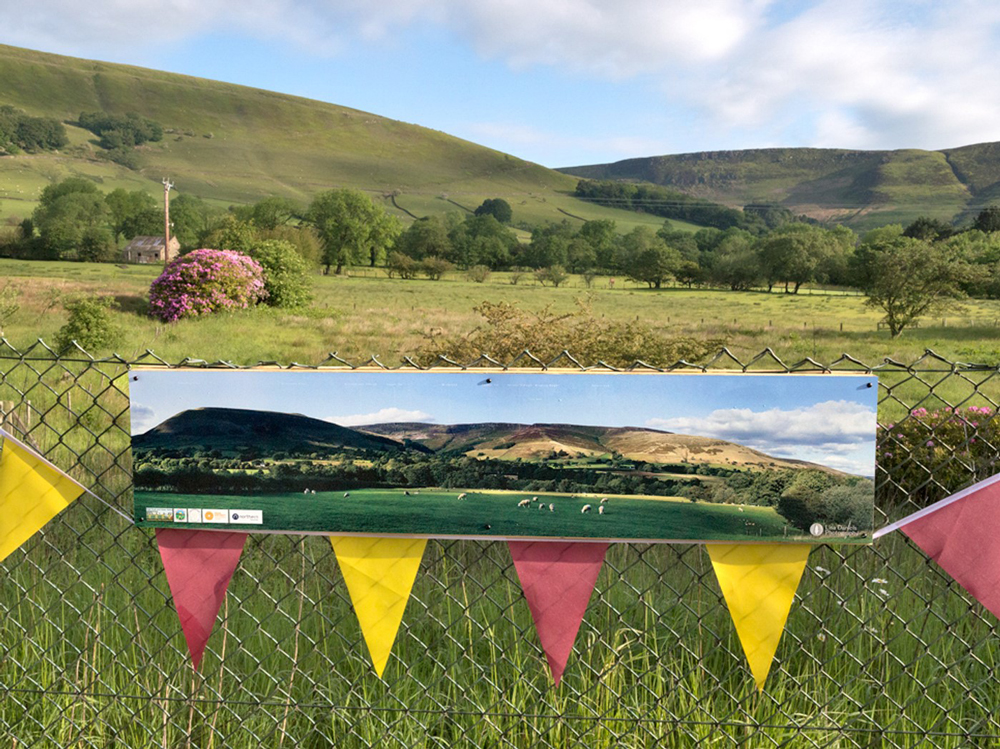 Look out for the photographic panoramas on the platforms which tell you the name of every hilltop and scenic feature you can see all around you. Also, the Moors For The Future displays which describe the very special moorland plants and wildlife to be found in the Peak District which you can enjoy if you walk out of the village onto the hilltops.

Edale has always been promoted by the railway companies as an attractive destination for a day out or a holiday, so the station group are planning to put up some reproduction vintage advertising posters from the steam train age.