Folk Trains postponed until further notice due to Covid-19

For a fun evening or weekend scenic rail journey with a special twist, the all year round programme of live music folk trains on the Glossop and Hope Valley lines in the Peak District of Derbyshire is hard to beat. For just the price of your train ticket, music lovers can sit back and admire the stunning views from the carriage window while being entertained by a live folk music band on board the train. 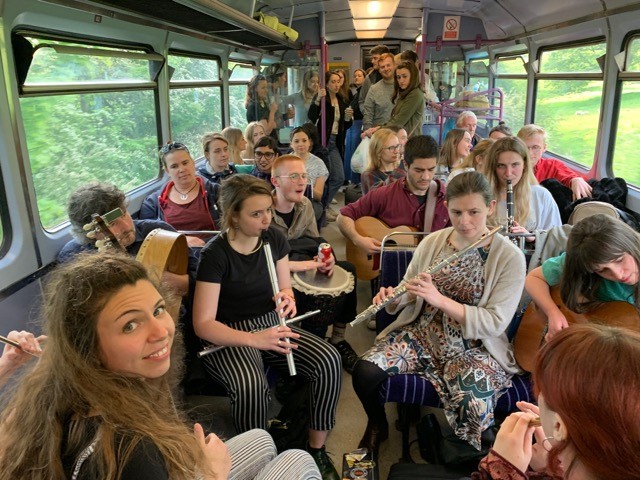 The folk trains have been running successfully for many years with full support from Northern Trains and are well known to folk music fans in the Manchester area and to fans living locally along the Glossop and Hope Valley railway lines. They are organised and run by two small teams of passionate volunteers with funding and marketing support from the High Peak & Hope Valley CRP.

Taking the Sheffield to Edale folk train as an example, the format is that it runs once every month on the fourth Tuesday. The band and a good number of folk music fans board the 19.14 Sheffield – Manchester Piccadilly train with the band playing in the front carriage as the train makes it station stops along the Hope Valley Line picking up more participants along the way.

Between Grindleford and Edale stations the train runs through the Peak District National Park, which was England’s first national park, established in 1951. On the journey passengers are guaranteed some stunning views of river valleys and hilltops, moorland and craggy cliff edges before alighting with the band at Edale Station.

The Ramblers Inn is situated next to the station at Edale and forms the venue for another set of songs from the folk band whilst everyone enjoys a drink and light refreshments purchased from the bar. Then it’s time to catch the 21.31 train back down the Hope Valley to Sheffield.

From Manchester there are two folk music trains each month. One on a Sunday morning uses the 11.42 from Manchester Piccadilly along the Hope Valley Line to Hathersage. The venue here is the Little John Hotel found in the heart of the village and named after the Robin Hood character reputedly buried nearby at St. Michael’s Church in an extra-long grave.

The second folk train from Manchester runs on the third Thursday of each month. Passengers join the 19.03 from Piccadilly picking up more supporters at other stations along the way before everyone alights at Glossop Station in the centre of town. A short walk follows to the Labour Club where a cosy atmosphere is enjoyed by everyone while the band plays another set of music before the return train at 21.52.

So for a fantastic trip out filled with good music, good company and grand views from your seat on the train, do come and join us on the next folk train!