Hope village is situated where the River Noe and Peakshole Water meet and has a range of hills to the north including Win Hill and Lose Hill. The two hills’ names have prompted a fanciful tale concerning the outcome of an imagined 7th-century battle where the winners from Win Hill fought and occupied Lose Hill, hence the names.

Leaving Hope Station and looking right, one of Britain’s most spectacular prehistoric hillfort locations can be seen. Mam Tor, also known as Mother Mountain or the Shivering Mountain because of the numerous landslips, is in full view.

The Romans built a fort at nearby Brough, on the River Noe, when they arrived in the Peak District in the 70s AD. This was called Navio, which is Latin for ‘fort on the river’ and it defended the roads between Buxton and Glossop. This was an important route for access to sites of lead production in the Peak District.  It was abandoned in 400 AD when the Roman Empire fell.

There is a wonderful walk that takes in the three forts; Navio, Peveril Castle in Castleton and Mam Tor straight from Hope Station: http://mediafiles.thedms.co.uk/Publication/DS/cms/pdf/peak-experience-three-forts-time-travellers-trail.pdf

Hope village was mentioned in the Doomsday Book as having both a priest and a church. The present church, dedicated to St Peter, dates from around the 13th century and is famous for its gargoyles, a Norman font and the stump of a Saxon Cross in the churchyard. The church has many fine features including a carved oak pulpit dated 1652 and a schoolmasters chair from the same period. In the churchyard stands a headless, 9th Century Saxon preaching cross.

The railway arrived in 1893 and opened up employment prospects for local people with easy access to both Manchester and Sheffield, although the long-established cement works with its’ tall chimney clearly visible near the village still provides much local employment.

The village has a selection of cafes and pubs and has local greengrocers and a deli as well as farmers’ butchers and a gallery. There is a large campsite in the village and the 4-star Losehill House Hotel & Spa on its outskirts plus a YHA Hostel at Losehill on the Hope to Castleton road.

The village has an annual beer festival, well dressing and other public events. During June and July, there is the annual well dressing event in Hope. This is a blessing of the water supply, in the form of a well in the village, and is an ancient ceremony dating back to the Celts or even earlier. It only takes place at villages in or near Derbyshire. Well Dressing is the art of decorating springs or wells with colourful pictures made of natural products such as flower petals.

August Bank Holiday is the date for the annual Hope Show, a traditional country show in a beautiful setting and famous for its sheepdog trials.

Hope railway station is the closest station for the attractive village of Castleton which is approximately 2 miles away.  There is a footpath which follows the river from Hope village to Castleton. Alternatively, there are bus stops on the main road at the bottom of the station driveway and a number 271 or 272 bus runs hourly to Castleton www.traveline.info

There is plenty to see and do in Castleton. There are four show caves open to the public for visits; Peak, Treakcliff, Speedwell and Blue John Caverns plus the imposing romantic ruin of Peveril Castle, built during Norman times, and enjoying fantastic views of the valley and across to the Winnats Pass and Mam Tor.

Castleton offers plenty of shops, cafes and pubs to enjoy and is notable for the “Blue John” gemstone found only locally and used to make beautiful jewellery and artwork.

For more information about the landscapes, history and tourist attractions in the area, head to Castleton Visitor Centre in the heart of the village.  Find out about opening times at www.peakdistrict.gov.uk Castleton looks particularly attractive at Christmas when the shops along the main street are lit with coloured decorations and Christmas trees.

The railway station is about half a mile east of the village of Hope and is located at the top of a long driveway clearly signed from the main A6187 road.

It’s a lovely country station complete with a traditional ‘steam age’ footbridge connecting the two platforms. However, please note that the only access to the platform for trains towards Sheffield is over the footbridge, so it is not suitable for wheelchair users, pushchairs or heavy luggage. Alternative travel arrangements for disabled passengers can be made in advance with Northern Trains Passenger Assistance Team by calling 0800 138 5560.

The trains calling at the station are operated by Northern Trains on their Manchester Piccadilly – Sheffield service. There is one train an hour in each direction throughout the day but fewer trains later in the evening, so do check the timetable carefully before you travel. These trains stop at every station along the line. For timetables click here.

You are expected to have a valid ticket before you board the train so please note that the only ticket machine at Hope Station is the one at the entrance in the car park next to the noticeboards, so buy your ticket here before going over the footbridge to the Sheffield platform.

Whilst you are waiting for your train, take time to admire the artwork and flower displays which brighten up the station and do make use of the picnic tables behind the Manchester platform if you have brought your lunch with you. These are provided and cared for by the volunteer members of the Friends of Hope Station.

Bus stops with waiting shelters serve the station on the main road at the bottom of the driveway. The main service connecting all the villages along the Hope Valley is the number 271 or 272 which runs hourly between Sheffield, Hope and Castleton on Monday – Saturday but less frequently on Sundays. More information can be found at www.traveline.info.

For cyclists, seven bike securing hoops are provided at the top of the car park next to the waiting shelter.

At Hope the Friends Group was established in 2018 and is a very welcome addition to the High Peak & Hope Valley Community Rail Partnership as it was the last of our eight Hope Valley stations to be adopted by its local residents.

The station now benefits from several attractive garden planters on both platforms and artwork created by children from the local school regularly appears in the waiting shelters. The station is nicely decorated to at Christmas time.

In 2019 the Friends started a project to improve the area at the top of the car park. Northern kindly arranged for some overhanging trees to be cut back and the branches were reduced to wood chippings which were then spread as a mulch to make a suitable surface for a picnic table area on a strip of land just behind the Manchester platform.

Early in 2020 the group received a grant from Derbyshire County Council which paid for a picnic table to be purchased and installed on the mulched area. A great place to eat your sandwiches, listen to the birds singing and watch the trains go by. 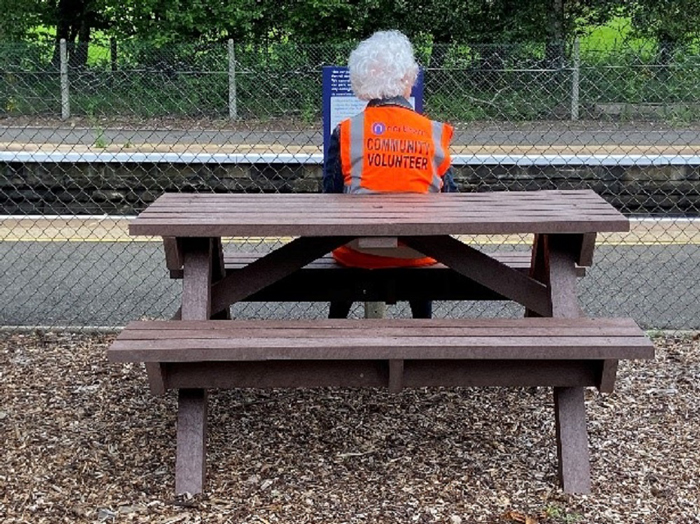