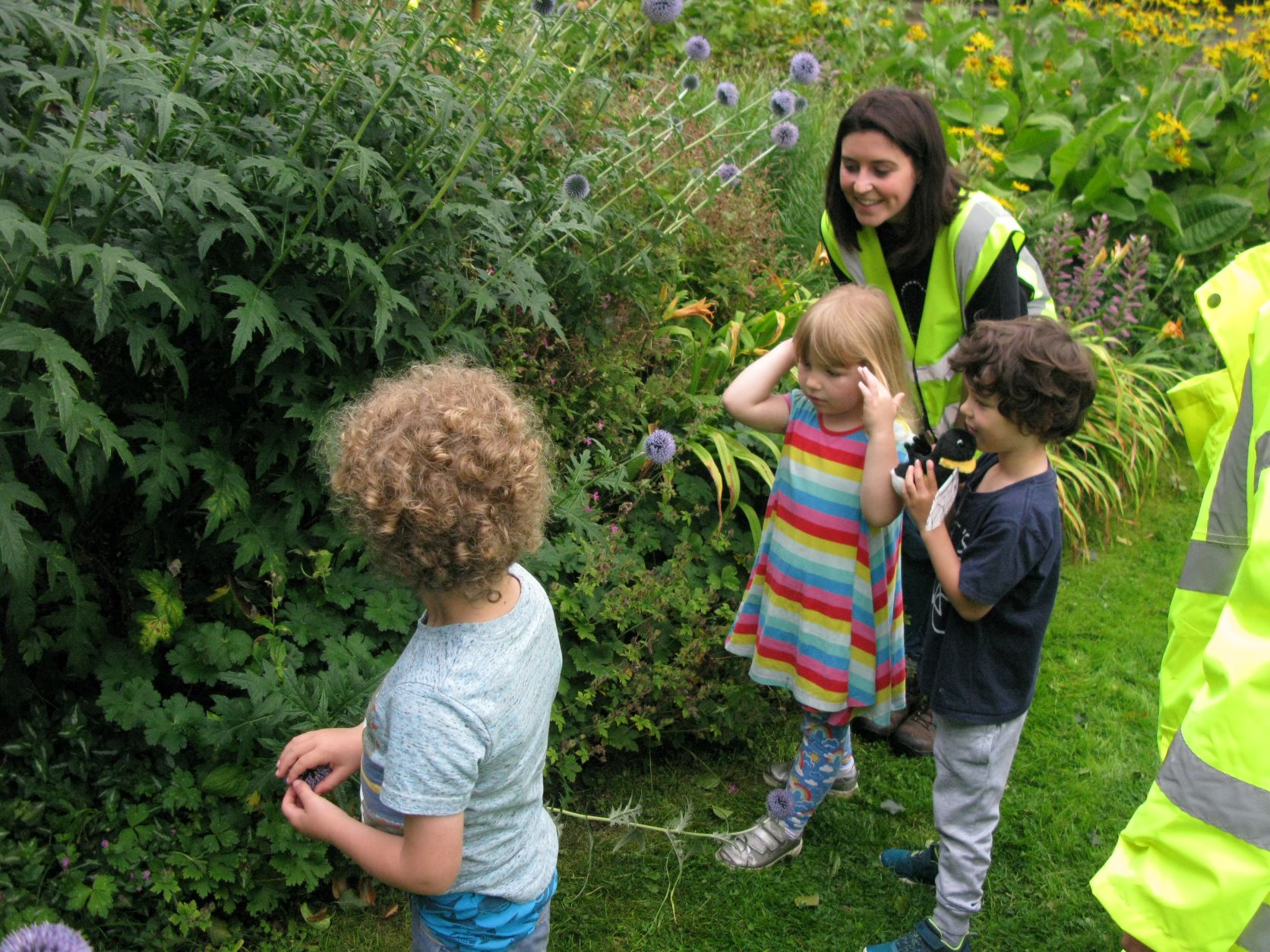 Eleven children aged from 1 to 6 participated in the first bumble bee safari led by Mel Steele of the Bumble Bee Conservation Trust as part of the Buzzing Stations initiative in which Edale Station Friends are involved.  Although the original training was held at the station, whose planters yielded a busy array of bees, it had been decided that perhaps this was not the most suitable venue on health and safety grounds for small children so the location shifted to the nursery itself!

Mel began by gathering the children around to be introduced to Bumble, a large cuddly bee that she had brought with her which everyone wanted to hold.  She asked them what they knew about bumble bees and heard that they were stripy, yellow, furry and had eyes at the back of their heads.  Some of the children already knew that they didn’t make honey but didn’t know that they didn’t die if they stung you or that like us they shivered to keep warm in the cold.  Mel stressed that bumblebees were gentle and that if you were kind to them then they would be kind to you, and if you found a tired bee you should either carefully put it on a flower or give it some sugared water.  Or ask mummy or daddy to do it for you!

She then read a poem that she had written specially for the children that day, illustrating it with actions from Bumble that held them alternately spellbound and laughing.  And then came the song which counted down from six to one enumerating the parts of a bumblebee’s body – six legs, five eyes, four wings, three body sections, two antennae and one tongue “as long as their body”.  This was sung with gusto and repeated.  As Mel said, the most challenging thing was the body sections line in which fitting in and getting any rhyme from “head, abdomen and thorax” had nearly defeated her!

After a snack it was time for the safari and the hunt for the bees began.  It didn’t take long because in Caroline Jackson’s garden just outside the nursery was a large clump of Alium that was literally swarming with bumblebees.  Some of the children were a little hesitant at first, but reassured by Mel’s words on the gentleness of bees and learning that they had no hearing so excited exclamations didn’t bother them, many got up close to watch them at work and see their tongues seeking out the nectar in the blooms.  They also saw at first hand their different coloured bottoms, and rounded off the morning’s learning by seeing how the bees would seek out new flowers whilst ignoring those that had already had their nectar harvested.

Time to return to the nursery was signalled by the children becoming bumblebees themselves and buzzing around Caroline’s lawn at break neck speed!  There they received the Conservation Trust’s activity pack with natural craft materials to make their own bee medallion, pictures to colour in and a booklet illustrating aspects of bee life and picture of the most common bumblebees.  Finally, to finish off their Beeday after lunch the children settled down to watch “Bee Movie”.

Big thanks to Mel whose preparation really paid off and who held the children’s attention throughout, introducing them to the wonder, variety and excitement of nature literally on their doorsteps.  Her input was so appreciated that she has been asked back to give others the opportunity to enjoy and learn.